Accused of plagiarism after accidentally uploading a draft? Defense tips from an attorney for students. 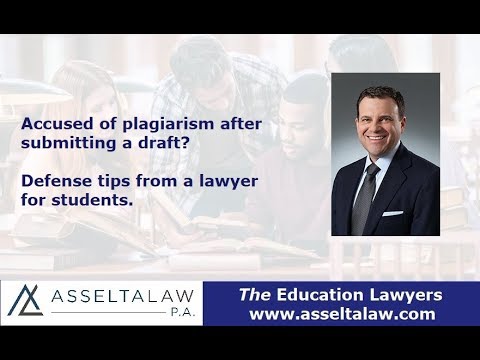 One of the most common academic integrity charges that students face is plagiarism. Sometimes students turn in work that is incomplete or has incorrect citations because they accidentally uploaded a draft. What should a student do if they face this issue? Read on for defense tips from a lawyer for students.

Is it possible to defend an accusation of plagiarism in school?

A plagiarism accusation is one of the trickiest charges to defend because intent is not a requirement or element of the charge. This means that just saying I didn’t mean to do it, or, it was an accident, may not work. Not to say that it isn’t a factor or is not important, but just because a mistake was made does not mean the student is automatically out of the situation.

How should I defend an accusation of plagiarism?

It is possible to build a successful defense to plagiarism; however, the defense depends on the facts of your specific case.

You should be prepared to show evidence that supports you had a final edited version and a draft. You should also have an explanation as to why your draft did not have or had incomplete citations. Going to an academic hearing can be stressful and the best way to succeed is to be prepared.

Can you help me defend against a charge of plagiarism?

Yes. I assist students all over the country defend against plagiarism and other academic integrity charges. As a lawyer who represents college students, my expertise in the college disciplinary process gives each student the best chance for success.

Click here to read what clients are saying about Richard Asselta on AVVO, a lawyer review website.